When we started the stretch from Echo Lake to Truckee I had no idea what to expect for wildlife.  This is the stretch where you can drop the bear canister, but that does not mean you’re out of bear territory.  At 7,000-9,000 ft there was a chance of seeing pika and marmot who are right at home in alpine environments. And wouldn’t you know, in our first couple hours on trail we spotted a marmot in a patch of snow.

​
Yellow-bellied marmots (Marmota flaviventris) are members of the squirrel family and one of the largest.  They live in colonies at high elevation and dig elaborate burrows. Marmots spend over half of their lives in hibernation and have developed some pretty cool adaptions to survive. Their body temperature can go down to 41 degrees F, their heart rate decreases to 30 beats/minute and they only need to take a breath or two/minute.

We did not see any pika, but I imagine there will be plenty when we make our way back to the High Sierras.

Unfortunately we didn’t encounter much else in this 60 mile stretch other than this curious evening grosbeak (Coccothraustes vespertinus).

This female bounced around camp for a while searching for food before tiring of me following her.  Evening grosbeak have been observed eating 96 sunflower seeds in five minutes.

The following night at camp we endured a rainstorm and some hail.  Once the sky cleared we heard the territorial call of a great horned owl (Bubo virginianus).  The most widely distributed common owl in North America, they have adapted to live in in various climates from desert to tundra.

Hat Creek Rim and into Burney was full of birds. We took a break at Baum Lake where we spent our time cooling down and watching osprey (Pandion haliaetus) and white pelicans (Pelecanus erythrorhynchos) fishing about the lakes.  As we neared the junction for Burney Mountain Guest Ranch we scared off a barred owl (Strix varia) perched for its nightly hunt on the edge of the woods.

At Burney Mountain Guest Ranch we relaxed in the shade by this pond while we waited out the heat to hike. 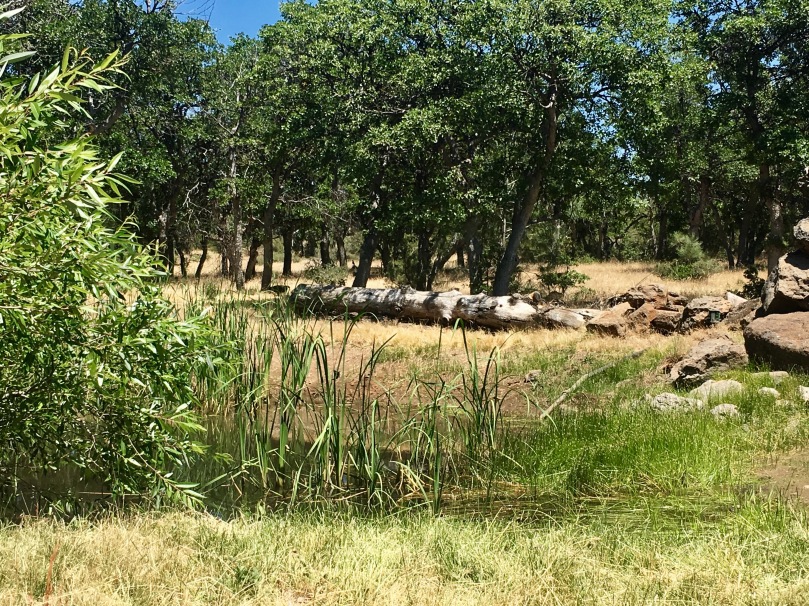 It might not look like much, but this pond was full of life.  Dozens of species of dragonflies and damselflies darted back and fourth above the water after prey.  Pairs of acorn woodpeckers patiently waited in branches above the pond for their opportunity to strike an insect.  Beyond the pond a pair of California quail and their chicks scurried about the shade foraging for insects. Not an uncommon sight on the property as it used to be a quail farm.

While I had better luck capturing photos of birds this stretch, they can’t all be close ups.  So think of these next couple as an I spy type game…answers provided at the end!

This American goldfinch repeatedly perched in the willows and then flew off. It may have been foraging for insects, however these songbirds primarily feed on seeds.

A few days later in the Shasta Trinity National Forest we stumbled upon one of the cutest and my personal favorite owls, a Northern saw-whet.

These small owls are only 5-9 inches in height, but when threatened will elongate their body to appear like a branch.  When prey is plentiful it is not uncommon for them to eat only the head.  It may seem wasteful, but they also exercise food caching, meaning they will hunt prey and hide it in a safe place for winter.

Though we didn’t see nearly as many reptiles as we did through Southern California, there were more of them than I anticipated.  One very familiar species being the western fence lizard (Sceloporus occidentalis) and this one was actually on a fence!

During mating season males of both species perform push-ups to display their bright blue patches and ward off other competing males.  I wish I got a video that shows just how fascinating it is to watch two competing males run around in circles doing push ups.

Locals kept telling us to keep an eye out for rattlesnakes in this northern section of California.  It wasn’t until coming across this juvenile northern pacific rattlesnake (Crotalus oreganus oreganus) that we realized we really should heed these warnings.

Surprisingly, this is the only rattlesnake we came across in this section, but it was not without alarm.  While a juvenile rattler might not seem too frightening, at this age they have not shed enough layers for their rattler to be fully developed.  Not to mention it takes juveniles some time to learn how to control their venom sacks.  This means a bite could be dry or it could unload its entire venom sack.  Based on my trekking pole experiment, a bite from this guy or gal might have been dry.

Males of these species don’t have well developed vocal sacs, giving them a call similar to that of a peeping chick.  However unlike most frog and toad species, this call is less of a mating call for females than it is a territorial call for other males during mating season.

One of the first frogs we came across was the Sierra chorus frog (Psuedacris sierra), also commonly referred to as Sierran treefrog.

The latter name is not entirely accurate due to them primarily being ground dwellers.  Although they mostly reside at ground level, their large, sticky toe pads do allow them to easily climb trees and cling to branches.

Common throughout the United States and the largest frog in North America is the American bullfrog (Lithobates catesbeianus).  While many might think of this as a native species, it’s historical range was actually east of the Rocky Mountains.  Bullfrogs became common throughout much of California (with the exception of deserts and high elevation) during the 1920’s when they were being farmed for legs. 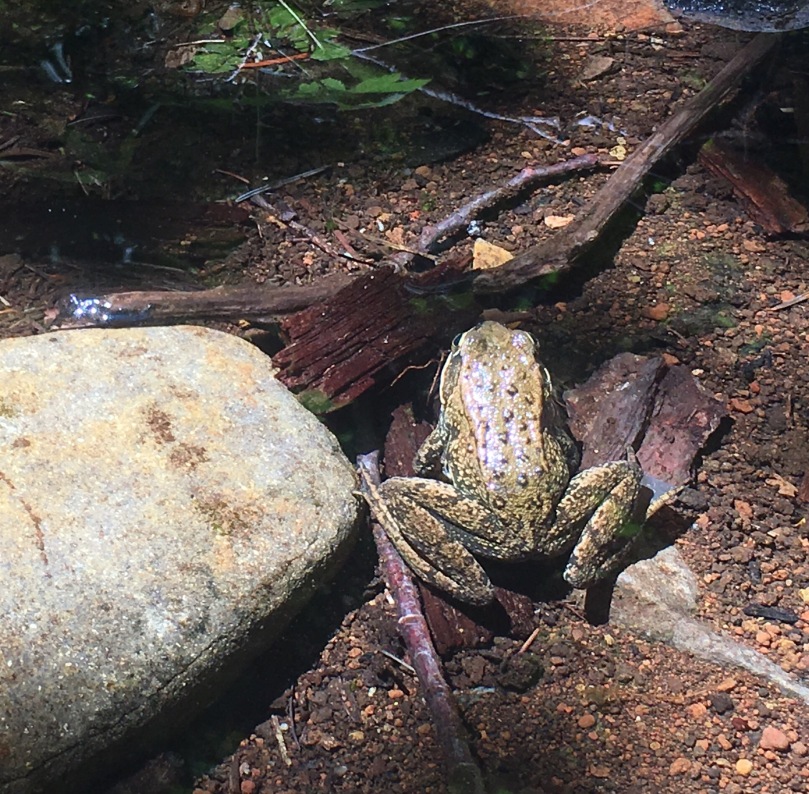 ​American bullfrogs have voracious appetites, eating anything they can swallow such as crustaceans, fish, small birds/mammals and other frogs (including other bullfrogs).  Sacs on the bullfrogs skin create toxins that make it unpalatable to many predators, making it one of the most successful invasive species in the west.

There were a few nights we were lucky to camp by water and fall asleep to the sweet serenade of calling frogs.  Although we didn’t get to camp at this small alpine lake it was bursting with frog life!

Similarly to frogs and toads, caddisflies larva are aquatic.  Adult female caddisflies lay clusters of eggs on the underside of vegetation, just above the waters surface.  Once the eggs hatch, they fall into the water where they live out their larval and pupal stages. 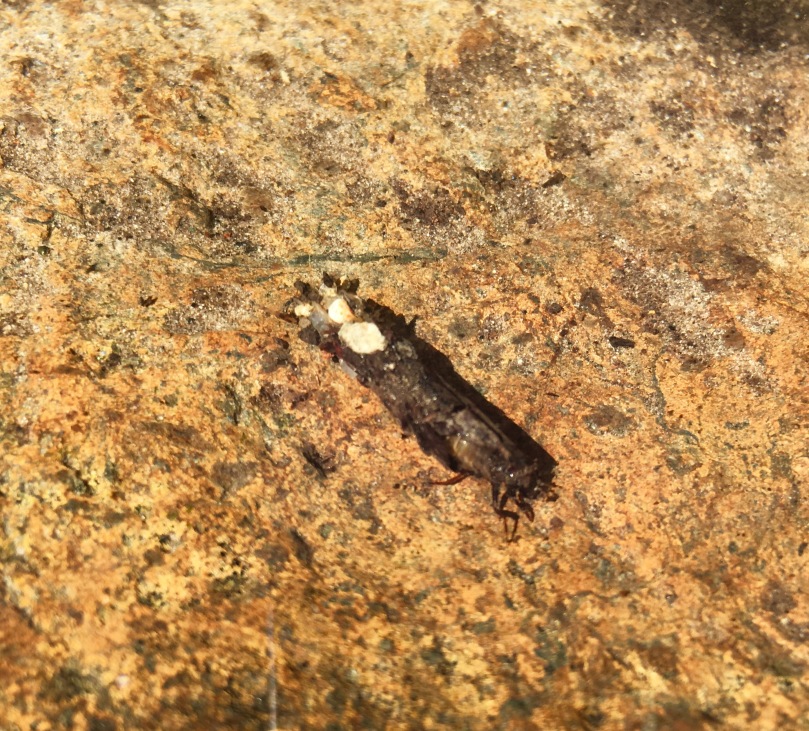 This is a case building caddisfly in the order Trichoptera, they build cases out of rocks and/or twigs to protect their fleshy abdomen.  Caddisflies are shredders/scrapers/collectors, meaning they feed on algae and plant debris found in the water.  As a relative to moths, their final phase of complete metamorphosis involves attaching themselves to a submerged object and spinning themselves in silk.  Once fully developed, they float to the top of the water where they molt and emerge as terrestrial adults.

While we saw very few adult cicadas, we heard plenty and saw numerous casings.  This casing likely belonged to a dog day cicada (Tibicin canicularis), a species of cicada that emerges every year mid-summer. 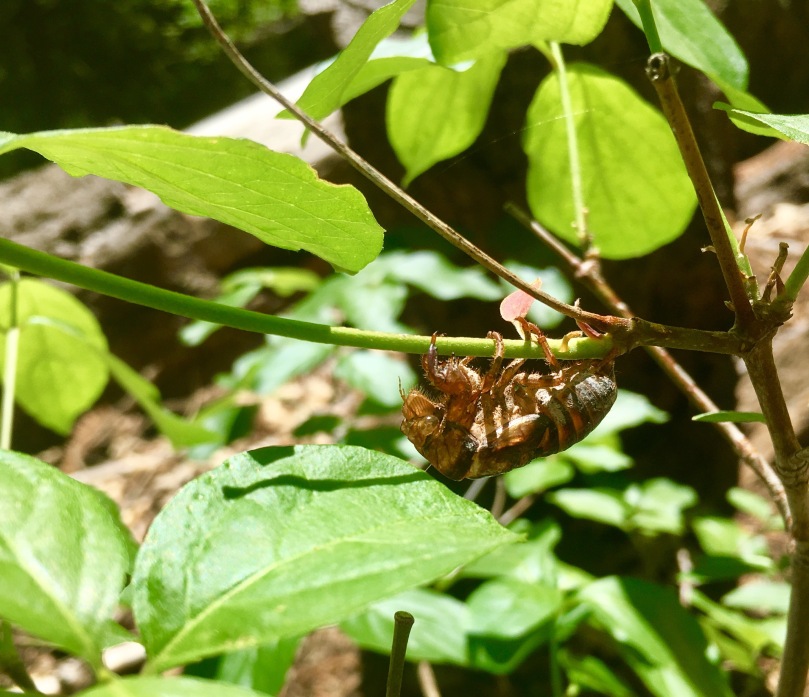 Adult cicada lay their eggs on the branches of trees.  When the the nymphs hatch, they fall to the ground where they burrow under and feed on the juices of tree roots.  Nymphs will spend 3 years underground before emerging to molt their exoskeleton.  As adults cicadas do not feed, instead focus their energy purely on reproduction.

While we ate lunch one afternoon this California sister butterfly (Adelpha bredowii californica) joined us to feast on some salt from our backpacks.  Caterpillars of this species utilize oak trees as their host plant, particularly live oaks (Quercus agrifolia, wislizenii and chrysolepis).  As adults they are attracted to dung, puddles, rotten fruit, sap, and some flowers including California buckeye, dogbane, and goldenrod.

Many species of butterflies “puddle” or seek out moist substrate to extract nutrients and minerals.  In most species it is just males that puddle, seeking out salts and minerals that get incorporated into their sperm.  In the case of the California sister butterfly, both sexes puddle.

Stay tuned for the much delayed flora and fauna of Oregon!